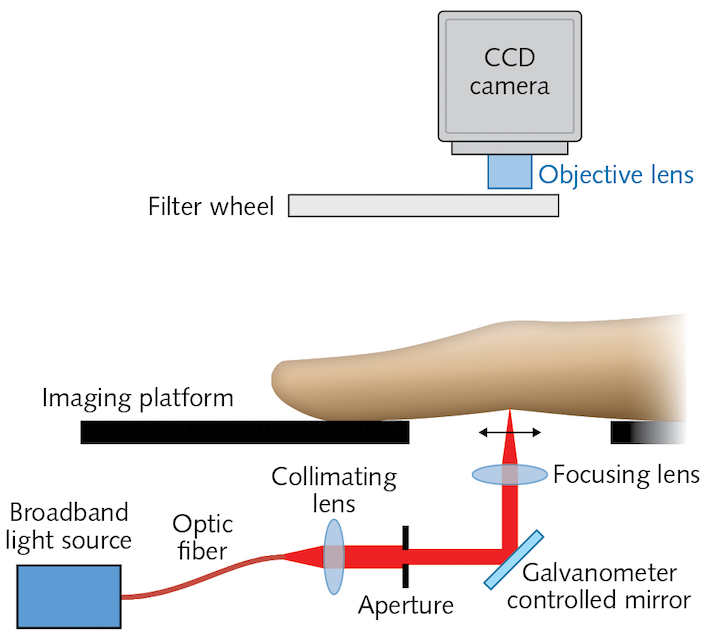 It is now widely acknowledged that aggressive therapy within the first three months of symptom onset improves long-term outcomes for people with rheumatoid arthritis (RA), an autoimmune disease in which the patient’s own immune system attacks the lining of their joints. But diagnosis is hampered by limitations of the technologies currently used to detect such inflammation, and the pain, swelling, and damage that result inspire a third of people with RA to stop work within five years of their initial symptoms.

A new noninvasive method for detecting RA, based on diffuse optical imaging(DOI), promises to overcome these limitations by combining 3D digital imaging and infrared (IR) spectroscopy to map blood content in a patient’s hand.1

Currently, diagnosis requires a combination of physical examinations by a rheumatologist, plus blood tests and x-ray or ultrasound imaging, both of which have specific drawbacks for detection of joint inflammation: Radiography’s low sensitivity to changes in soft tissue makes it ineffective for quantifying joint damage, and the requirement that ultrasound (as well as magnetic resonance imaging, or MRI) imagery be interpreted by highly trained staff makes it time-consuming and expensive, and limits its availability. Further, analysis of the results is subjective. By contrast, the DOI-based approach is quick, low-cost, and highly sensitive, and offers objective, quantitative analysis (see figure). In addition to enabling early detection, it can serve as a means for monitoring treatment effectiveness.

The optical technique was developed by a UK-based team involving members of the School of Computer Science and Healthcare Technologies Institute of the University of Birmingham in partnership with rheumatologists from the University’s Institute of Inflammation and Ageing and the Birmingham Biomedical Research Centre of UK’s National Institute for Health Research.

It works by having the patient place a hand inside the scanner, which measures size and contours to create a 3D model. Next, the system directs near-infrared (near-IR) light (650–930 nm) through the fingers one by one, while measuring light passing out of each digit. Because oxygenated and deoxygenated blood absorb light differently, shifts in key light-absorbing chromophores (oxy- and deoxy-hemoglobin, water, and lipids) as well as changes in scattering properties provide intrinsic optical contrast. The contrast makes it possible to calculate decreases in blood oxygenation (hypoxia), increases in blood-vessel formation (synovial angiogenesis, which indicates inflammation), and high concentrations of leukocytes and proteins—all of which are warning signs of RA. The system uses a normalized Fourier-transform method to assess the spatial distribution of transmitted light along the joint.

The UK researchers are not the first to attempt near-IR imaging of RA joint inflammation, but while earlier efforts laid a nice foundation for their work, these studies dead-ended for various reasons. In one case, the researchers were unable to quantify results independent of baseline measurements for each specific patient, and in another, equipment cost-prohibited the potential for clinical translation. In addition, all earlier point-source-based joint-imaging systems have applied light to the dorsal side of the finger and acquired images from the palmar side. Rheumatologists working to establish a scoring system for RA inflammation, however, agreed unanimously that acquiring images from the dorsal side enables greater sensitivity. So, the development team reversed the standard orientation.

A 2018 publication outlined specifications and acquisition protocols for the researchers’ system.2 Briefly, though, the platform upon which patients place their hands uses a broadband point source to illuminate a finger joint using five wavelengths of light (650, 710, 730, 830, and 930 nm) and an air-cooled CCD camera to collect optical transmission images at 14 locations in a line along the finger’s sagittal plane. A filter wheel positioned just before the camera’s objective lens provides spectral decoupling. The researchers created an image mask, which enables implementation of an autoexposure routine. Wrinkles in the proximal interphalangeal (PIP) joint—the major joint, closest to the knuckle—serve as an anchor to indicate which exposures are best for analysis. In a pilot study, the team examined 144 joints from 21 rheumatology patients and were able to accurately detect inflamed joints, with results closely matching diagnoses made using ultrasound and clinical examination.

Developed as a system able to integrate seamlessly into clinical setups, the rapid, noninvasive technique could enable diagnosis within the three-month window of symptom onset and, once treatment has started, help clinicians assess how effectively it is controlling disease progression. The system “offers a low-cost, objective way of detecting the disease and potentially grading how advanced it is,” says professor Hamid Dehghani, who led the study. He adds that the development team hopes to eventually enable clinicians to offer personalized treatment plans for patients. In the meantime, though, a shorter-term goal is to investigate options for miniaturizing the scanner and for further boosting its accuracy.